It's Out! Broadcast 12: Invasion Release Day Is Here! 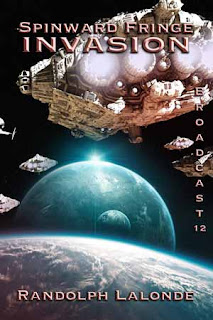 It is my pleasure to announce that Spinward Fringe Broadcast 12: Invasion is out everywhere in Ebook form!

It took longer than expected to write this novel, especially since it explores an event that most of you saw coming. Of course there would be an invasion, when your main characters plant a flag so close to their enemies, there will be a confrontation eventually. Making that story interesting and engaging was a great challenge.

This is the story of that confrontation. We also follow Alice, move the story that began in the Chaos Core Crossover forward, and see how things have developed in the Haven System. The story is also told from the eyes of new citizens, to the Admiralty and the challenges they face as they look out towards the stars for aggressors who could arrive at any moment.

After being serialized on Patreon in first draft form, this edited and revised edition is finally going out, so everyone who waited instead of reading two chapters a week can enjoy it their way. The copy editors and first readers who read the book whole has said it's fast paced and engaging, so I hope you have the same experience when you read it, and that you get swept up in the characters' plights as I did when I wrote it.

I'm happy to announce that it's already the number one Science Fiction Novel on the Apple iBookstore, so it joins almost every Spinward Fringe book in earning that accolade.

Here are a few retailers who are carrying the book right now:

Thank you for supporting this series. Just like a television show, Spinward Fringe is only as successful as you make it by turning up for each Broadcast. It's been a great decade for me and it will only get better. On May 14th (this Tuesday), the Spinward Fringe story continues in Broadcast 13: Warriors, as a serial on Patreon.