Looking The Elephant In The Eye 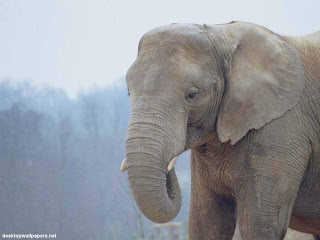 When Spinward Fringe Broadcast 0: Origins became free at Amazon.com and Amazon.co.uk, a lot more readers joined our crew. Since then I've been inundated with private messages, emails, reviews, Facebook messages and more. The attention the series is getting is great, and I'll get back to everyone, it'll just take longer than usual.

Several of the emails I receive regard formatting and editing issues. Aside from a recent problem I didn't know about when a couple of books were migrated from Mobipocket to Amazon and the Kindle version got mulched, I was already aware of the issues.

With the extra attention the series is getting, comes a bigger royalty cheque I'll have access to in about three months. With a new budget on its way I set out to find a firm that would format my eBooks professionally with an editing team that does work for big and small publishers. This morning I made a deal with a firm that can deliver everything I need on the budget I'll have.

The first book they'll be working on is Broadcast 7: Framework when it's finished sometime in March. By September the entire Spinward Fringe series will be in their hands and new versions will start appearing between then and October.

Aside from the removal of one scene, the entire series will remain the same with respect to plot, technology and characterization. There have been a few reviews and correspondences that criticize technologies in the books, and I will only respond by saying that every single technology has been researched, and aside from a correction made last year, I stand by the technical details in the books. Engineers, soldiers and mathematicians alike have all enjoyed the series, and I've even had a little help from time to time when I had questions from these fantastic professionals. When in doubt, I find someone smarter than myself and crack a book. On a final note regarding that issue, I've never presented Spinward Fringe as hard science fiction. My research is done with the purpose of presenting a strong setting.

As for anyone who doubts characterization in the books, well, aside from one scene that will be removed in the final edit of the series, I stand behind that too. I can honestly say I've created these characters from people I've known, situations I've experienced, and decisions that have been made historically during times of adversity. The most amusing criticism I've seen about characterization was about a pair of characters that were irritating and potentially harmful. The reviewer found them so obnoxious that they seemed to take it personally. FANTASTIC! Leland March and his partner in crime were supposed to be annoying, difficult to remove and clearly selfish. I've met those personalities under different names in my life several times. Those are the most realistic characters in the entire series, and I know at least one reader who can't wait to find out what happens to Leland March next. That's right, Leland has his very own fan simply because he's annoying, selfish, and thinks he's the hero of the tale.

The books are selling better than ever, and I'm absolutely astounded. In return I'm using a great deal of that money (thousands of dollars), to hire professionals who polish books for New York Publishing houses for a living. Every New York publisher does it with every book they put on the shelves, and I love the series so much that I can't resist submitting it to the same treatment. It's the least I could do to honour the series, you the reader, and to show my gratitude.

Everyone who already owns a digital copy of the books will be able to update to the new editions for free once they become available. As for the print versions, I'll be pulling them off the shelves. When they reappear the price will be set so I'll only be making about $1.00 each. Why? Print is expensive, too expensive. If you're getting an unsigned copy, it shouldn't be at an inflated price.

I'm very grateful to everyone who has read the series, and there are other things in the works for Spinward Fringe. With very few exceptions I'm blessed with an outrageously cool group of readers.

A Candid Interview Of Yours Truly At Author Culture!

It's been a while since anyone has asked me questions about what I do in a public space. I receive plenty of emails from people with pointed questions about Spinward Fringe, self publishing, and other topics involving what I do every day.
The great thing about the interview that was just published at Author Culture is that a lot of the same questions are answered publicly now, and with more specific detail. This interview asks questions about my routine, the reality of offering the first book free with regards to how well that spreads the word about my work, book trailers and more. I enjoyed answering so much that I offered a few details I've always been tight lipped about.
You can check the interview out here: Author Culture - Exploring The Wonder Of The Genre With Randolph Lalonde
Thanks to everyone at Author Culture for having an interest, especially Johne The Sky Pirate!
RL
[I accept most interview requests, especially those that focus on the content of the Spinward Fringe series.]
Posted by Randolph Lalonde at 12:31 PM No comments:

Broadcast 7: Framework - The Half Way Mark 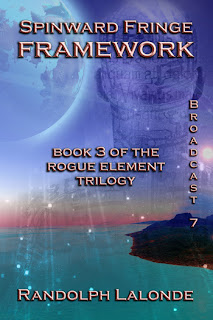 That title is discouraging to some of you, I realize. Let me explain a little.

The first draft took several months, and it got scrapped because it wasn't what I needed it to be. There were a great number of good ideas, and several things were resolved, but it had little density. Besides, first drafts aren't for releasing, they're for finishing and discarding. Why? It's where you make all your terrible plot mistakes, that's why.

I started writing draft 2 and realized that I was writing from the middle of the book, that not enough time had passed for the characters and there was a lot of good stuff left on the floor. I stopped everything, picked up the pieces and started the current draft.

So far, this draft is going to be released. My editor is thrilled, there's incredible density, meaning that every chapter is significant, and the dialog is singing. Things are clicking, and I'm writing as much as I can every day. I've been working on this draft since December and I'm about half way through it. I honestly believe I haven't written better, ever. That's over two million words of writing in my life that don't measure up to what I'm doing right now.

While I'm working on this, the Spinward Fringe universe is opening to thousands of new readers thanks to Amazon listing Origins for free in the US and the UK. About a thousand copies are being downloaded per day. The launch of the printed version of Spinward Fringe Broadcast 0: Origins as well as the opening of the Spacerwares store are impending. There are about eight people patiently waiting for their prizes to land, and it's looking like things will be roughly on time. You'll be getting the first T-Shirts, hot off the presses.

During the next month there will be more news about the store, and some real information about the as-yet-unnamed miniature production studio. I just secured enough moolah to get the basics and if my older PC sells, then I'll be off to a good start.

I hope this update gives everyone a better picture of how things are going. Thank you so much for hanging in there, I'm doing everything I can to make sure it's worth the wait.