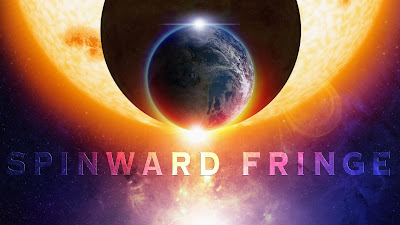 I didn't think I'd get the chance to write this blog post when I set out on this journey. I started writing Spinward Fringe as a fun Space Opera adventure that I wanted to see but couldn't find. Science Fiction television shows were ending and being cancelled: Stargate SG-1, Atlantis, Universe, and Farscape were all either over or ending. Battlestar Galactica (Ronald D. Moore's reboot), ended in lacklustre fashion and the spinoff, Caprica, failed to live up to fans' hopes. Star Wars was hibernating for the most part, Star Trek was back in reruns and I'm pretty sure I'd seen everything at least five to ten times, and newcomers like Firefly didn't last.

It was a dark time for SciFi, and it wasn't the first time in my life when the force was weak with the serialized, space bound science fiction adventure sub-genre. Instead of weeping in front of more reruns or seeking out obscure box sets of more obscure series, I decided to try writing my own with the purpose of entertaining myself.

I wrote fantasy before that along with a little horror but took a couple years off after my first self publishing adventure in 2004. In 2008, starting on new years' eve, I dug into a Space Opera idea that I had been daydreaming about for a year. That became the First Light Chronicles, which was eventually collected into one volume and renamed Spinward Fringe Broadcast 0: Origins.
I released it in eBook form on a site made by a company in France called Mobipocket, unaware that Amazon already bought the company and was using the tech to develop the now dominant Kindle platform. A year later, I was firmly making a living and spreading my books out to Amazon, Smashwords and other retailers.

It's with gratitude and a little disbelief that I look back at the decade that followed. I've written and published twenty-two novels in that time, twenty-one of which can still be downloaded. Last year I verified that over a million copies of my books were downloaded legally with at least six times that number pirated (that's a gross underestimation).

Granted, many of those legally downloaded copies were free, but it's still a number I wouldn't have dreamed of hitting when I started out in 2004 with my first in-print self published novel, then started writing and releasing SciFi in eBook format.

Starting today, I'm celebrating ten years of successful self publishing. In that time that's all I've been doing to earn my living, and to kick it off I'm participating in the Smashwords Summer sale. All my books are on sale or free there now, and I invite you to take a look, leave comments on your favourite books, maybe follow me there as a favourite author if you like and be a part of it because they have been a part of my success. Here's a direct link to my page there.

I'm also having a poster made and updating most of the formatting for all my books while I correct errors throughout the series. The updates will be free for everyone, available through your dashboards wherever you purchased or downloaded them.

I'm wondering if you have any other ideas to celebrate this anniversary. Please, leave them in the comments, but don't forget the Smashwords Summer Sale, especially if you missed Highshield, Brightwill, Dark Arts, Spinward Fringe Broadcasts 6.5 or 10.5.

Thank you very much for reading and buying my books through the years. I hope I can do this for the rest of my life. I love creating this kind of entertainment, first for myself, then for you!

RL
Posted by Randolph Lalonde at 4:13 PM 6 comments: Links to this post