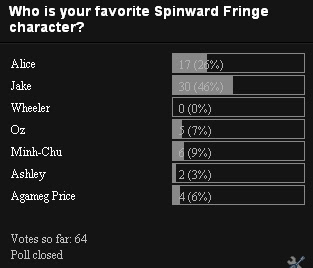 The turn out for this poll has been the highest so far, and the results are clear.

The fact that Jacob (Jake) Valance is the most popular character in the series tells me that featuring him as one of the main characters in every book has been the right decision. It also tells me that he'd be sorely missed if he weren't a point of view character in a future book.

Thankfully, his journey is far from over. Space Operas thrive on characters who have plenty of miles behind and ahead. While Jake often serves as a guide, telling us what we need to know about the places and situations we see in the books, he also has a lot to learn. I could write a whole series of blog posts discussing what Jacob Valance doesn't know about relating to people, his environment, and on and on, but then I'd be spoiling an awful lot.

The second favorite character is Alice. I was cheering for her, to be honest, so I'm happy to see her up there. She's a challenging character to write for, but she's driven a lot of the need to discuss the difference between artificial intelligences and biological characters. It all started with one line where I stated that there is a difference between emotions in software and in biological beings. Alice has been a great vehicle for showing everyone what that difference is, being a character who has experienced both sides. She's still an interesting character for me, and I'm glad 26% of you prefer her.

In a distant third place is Minh-Chu Buu. What can I say? He's one of my favorites, always has been. Is he a challenge to write? Hell yes! He was also the source of the first controversy in the series. I can't say more because there are many readers who haven't read the entire series yet. Of all the characters, he's the one I can talk about the least, because spoilers would come spewing out if I discussed him at length.

There are a few other interesting things about these results and the top three characters:

- Jacob Valance (yes, Jacob, not Jonas), Minh-Chu Buu, and Alice were the first characters I was sure would be in the First Light Chronicles. Ayan, who wasn't in the survey, was fourth or fifth.


- A cover for a future novel featuring a model cast as Alice was created over a year ago. The summary I wrote for that book is still good, and I'll be using most of it in a future broadcast. 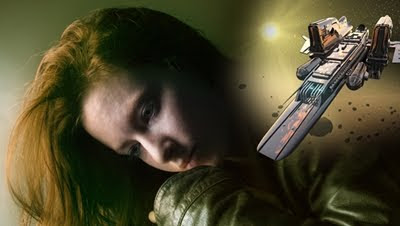 - I didn't know what would happen to Alice until I wrote the end of First Light Chronicles Limbo. I originally had a plan to have her get stuck in Minh's comm unit for a book as extra comedy relief. The ending I wrote for Limbo made that idea pretty much impossible.

- The inspiration for Minh-Chu came from an elementary school friend of mine. The character almost wasn't included because I wasn't sure if I wanted ethnicity to divide people on Freeground. It turns out that ethnicity is becoming important as I broaden the scope of Spinward Fringe as a series.

- Alice almost didn't appear early on either, because I thought it might be a better idea for AI's to be outlawed. Jake would "adopt" her later. I put her back in because Jonas Valent needed someone familiar to talk to in the elevator on his way to Admiral Rice's office.

- In the original opening chapter of First Light Chronicles: Freeground, Jacob was in prison with Minh-Chu Buu for violating electronic security laws. The simulation that serves as the opening now was done in flashback.

- The rough draft of the Spinward Fringe two hour pilot starts with Jonas Valent who is in prison having a conversation with Alice that tells us what he's imprisoned for and why he values the freedom of his co-conspirators much more than his own. She's nested in a "Brain bud" (computer implant in his skull). Minh is brought in next and he tells Jonas that the entire Admiralty is discussing their case.

So, with all those non-spoiler examples of those three characters being in close proximity from the early days, I'm wondering if there isn't some kind of lesson I should be learning from the poll results. The lesson will come to me.

As promised, I'll write Broadcast 8 from the perspectives of Jacob Valance, Alice Valent and Minh-Chu Buu. It'll be my pleasure!

Broadcast 6 is two weeks from being handed in to my editor. I've been told that if Fragments isn't finished by the time she arrives back in Canada, I'll be in serious trouble. Thankfully, I don't need the extra motivation, but it doesn't hurt.

What will the next poll be? Tune in Tuesday to find out.

I just can't wait for the next book... Please hurry I want to know what happens next!!!