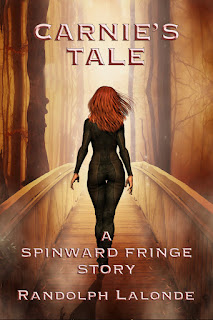 [The release of Carnie's Tale will be followed by Broadcast 11: Revenge near the end of 2017.]
Posted by Randolph Lalonde at 2:07 PM

Brilliant news for us Fringe fans - looking forward to that!�� Just a little thing for you to consider tho... The pre order links are for the American sites so it may be worth including Amazon UK (for example)

I picked the first book in this series merely at random. I do this at times so as to not get 'stuck' with old favourites. I must admit to being pleasantly surprised at how easily I became entrenched in the story and characters. I am getting close to the final books in this series and will be sad to see them end.
IF they make a TV version, I hope they do as good a job as what has been accomplished with the Game of Thrones saga.
Keep up the good work Randolph...you have progressed from an 'unknown random pick' to an author I will look to in the future.