Do I Have Suggestions For Young Teen Readers? 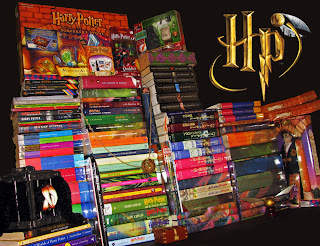 Recently I received an email congratulating me on writing a good book that could be read by adults and young teens. They were referring to Spinward Fringe Broadcast 0: Origins, and it wasn't the first such email. While I didn't write Origins as a YA novel, I'm happy that parents feel comfortable sharing that book with their kids. I never really had discussions with my parents about books when I was young, even though I had phases where I'd go through paperbacks like a young pup goes through chew toys.
What made this email different from the others about sharing Origins was the parent asking me if I had suggestions for other books that she might share. I immediately looked through my bookshelves and picked five that weren't intentionally written for the YA audience but I thought would be great picks. Here's the list:
Hitchiker's Guide To The Galaxy - Douglas Adams
Shatter - Elizabeth C Mock
The Chrysalids - John Wyndham

Hero Wanted - Dan McGirt (Almost finished reading this one, and it belongs here)
Lord of the Flies - William Golding
I was also invited to post about this on the Kindleboards, since she frequented the forums, so I did. No need to go looking for my post, which turned into an article, I'll just repost it below:
I normally read a young adult book every month or so, mixed in with the fiction and non-fiction I go through regularly. I started reading YA regularly when several readers contacted me to tell me how happy they were about being able to hand my work down to their young teens. I hadn't even realized that my work fit in that age group, to be honest, so I was curious.

Since then I've found that things have changed since I was a young lad. When I was ten or eleven, I started turning to family for recommendations of what I should be reading and over the next couple of years I found everything from Stephen King to Frank Herbert to J.D. Salinger or even Kurt Vonnegut in my growing hands.

Now, if a young reader asked me what they should be reading I'd have a whole stack of books to place in their hands that would feature characters like Harry Potter instead of Holden Caulfield. Young adult fiction has provided pleasant surprises as well as thorough disappointment. In adventure books like Halo: The Fall Of Reach, I've found a novel that could stand on its own outside of the franchise - not a massively impressive scifi yarn to be sure - but a good, simple adventure book that doesn't underestimate the reader's intelligence. On the other hand, books like Star Wars: Jedi Apprentice are condescending, flat, obvious and unpolished. For such a large, well funded franchise, those books should be more polished, and present more complex, if not challenging content.
There are many non-franchise YA books out there, but in my small-ish city of Sudbury, the franchise books are stacked tallest and widest on the shelves. I also find that most books written for the YA audience take place in high school, which is great for teens who need to find characters who are very easy to relate to, but I can't help but think that it's not very challenging.

Almost ten years ago, my young cousin (who is now six foot four), asked me if I knew of any good books. I think he was fourteen. What did I put into his hands? From my own shelf I gave him my tattered copies of Lord of the Flies, the Hitchhiker's Guide To the Galaxy and Druss The Legend. None of these are considered YA, but he loved them all (especially Hitchhiker's Guide), and everyone agreed with my choices.

What would I put in young hands if someone asked if I had anything good to read now? I have to be honest - I like challenging young minds, so I'd probably still hand them (this list comes from me glancing at my bookshelf right now), the Lord of the Flies, The Chrysalids and a copy of one of my own books, of course. They'll eventually find Harry Potter on their own, and as for high school dramas, well, they'll find plenty of those too.
So, I'm wondering: what would you recommend to parents who want to share a reading experience with their kids or teens?
RL
Posted by Randolph Lalonde at 11:48 AM 4 comments:

Framework Update - Because So Many People Are Asking 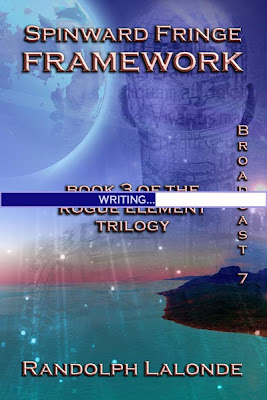 Five emails, a Facebook message, three private Twitter messages, several replies scattered across blog posts and now the pizza guy. That's how many (and how) people asked me when Spinward Fringe Broadcast 7: Framework will be finished since yesterday evening. At least the pizza guy didn't ask me to sign my receipt then run off with it this time. That was a good laugh.

Don't get me wrong, it's great that interest in the series has gone up, and I'm glad people want to know how this story ends (until it starts again in Broadcast 8). I just thought I'd answer the burning question in one place so I could refer everyone to this post.

Here's how long I expect things to take and why:

I'm hoping to finish writing my last draft of Broadcast 7: Framework by the end of March.

After a week or three of looking it over and making sure everything is as I'd like. I'll be collaborating with a second and third pair of eyes who will make sure I'm saying what I mean and really mean what I say. Also, they'll smack me upside the head if I've done something completely unrealistic or stupid. Tweaks will be made, the telling of the tale will be tightened.

When that's finished I'll be sending it off to a company that takes care of line editing for indie authors as well as larger publishing houses. I've seen their work and trust the author who recommended them. I also read what they did to his manuscript - top work.  It'll take about a month to get the work back from them, and another week or two for me and a couple other people to look over the final manuscript. Why add another six or more weeks to the wait? Editing has been the achilles heel of the series because I haven't been able to afford professional line editors until recently. Also, I've been impatient and rushed in the past. I'm told I have to stop that.

The final manuscript will go to a formatting house, where they'll make magically perfect versions of the book ready for Kindle, and all the EPub readers on the planet. That'll take one to two weeks.

So, that's how long it'll take and why - if everything goes as predicted. There's always a chance that the book will be longer than expected and I'll need a couple extra weeks, or a group of ninja assassins will seek out and kill everyone I'm planning to work with. The good news is that I haven't been working on any other writing project, I've barely been thinking about anything else, to be honest. The dishes and laundry are piling up!

I love writing this series, and in all honesty I'd write this book if there was no one waiting for it. I am doing my last draft very differently as well. It is taking longer, but the results are much more to my liking. I've learned my lesson from rushing previous Broadcasts and will continue to pay the price (literally and figuratively), for the foreseeable future when I take another pass on Broadcasts 0-6 then pay for an editing team to give them a final polish. That comes after Broadcast 7 is on the digital shelves.

I thank you for your patience, am really happy you've enjoyed the ride so far, and hope you stick around.

Addendum: I'm reminded by another author (who has a lot more experience than I), that most books aren't released for between 6-18 months after they've been written. To be honest, that makes me feel much better about the time frame I'm working on. Thanks Kim!

[Anyone have any paper plates?]
Posted by Randolph Lalonde at 7:35 PM 20 comments: