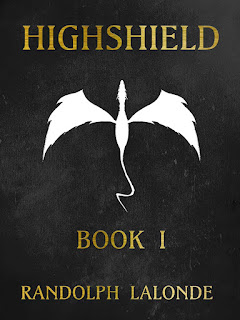 The final release date for Highshield is September 21, 2017. This is the first in a fantasy trilogy that spans decades. In Book I Rendiran, a young priest to a Goddess who has proven her existence to her followers, must take responsibility for a child who is resurrected to become a great paladin.

He finds that trustworthy people are difficult to find as he has to make a journey with a young boy, Tadrin, across the countryside amidst political and religious upheaval.
If matters weren't already complicated enough, he has to face the undead and zealots from enemy religions who want to sacrifice his charge to their own Gods.

Highshield takes place in the same world as the award winning novel Brightwill, and examines a different side of the universe introduced there.

The ebook and printed version contain an extensive Appendix as well as the final edit of a book enjoyed by many on Patreon, where readers were able to choose the fate of a main character, comment on the developing story and see the rough version months before the final release. An important preview chapter from Book II is also included.

Preorders are available through:

Please note that many Patreon subscribers will receive the Ebook version for free, you know who you are!

[On September 6, 2017, the Patreon site and this blog will become completely dedicated to Spinward Fringe and the books that will be arriving before year's end. Watch the Patreon Site for the most up to date info.]

Posted by Randolph Lalonde at 8:06 PM No comments: