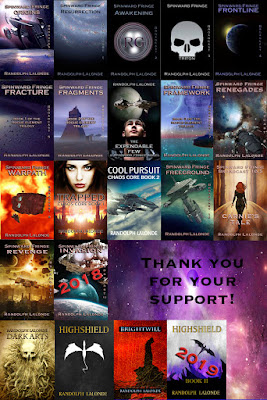 Despite a few issues that were caused by yours truly, Spinward Fringe Broadcast 10.5: Carnie's Tale is a success. Sure, it didn't chart high, but over a thousand of you downloaded it and the reviews are largely positive. Thank you so much.

A few typos and minor errors weren't caught before it was uploaded, so an update addressing those will be posted next month, you can update for free wherever you bought the book.

Right now I'm working on Spinward Fringe Broadcast 11: Revenge, which is due out at the end of February. That doesn't mean that you have to wait that long to read it though. Chapters are already being posted on my Patreon page. Every Saturday a free chapter will appear, with subscribers getting a bonus chapter every Wednesday. We're following Alice's journey through the novel until it comes out. For the sake of Patreon, I'm calling the serialized preview Alice's Revenge. You can find the Index here.

Spinward Fringe and everyone who loves it has kept the roof over my head for nearly ten years now, and as we approach the tenth anniversary of the series, I'm going to concentrate on delivering more content in that universe. I'm constantly tempted to work on other projects, and in 2017 I gave in, finishing a lot of work on two role playing games before completing the first part of an epic fantasy series I've been imagining for over twenty years, Highshield.

Rounding out the year, I decided to develop characters and settings that I knew I wouldn't have room for in Spinward Fringe Broadcast 11: Revenge. Many of the chapters in Carnie's Tale were cut from Broadcast 11 because they wandered too far from the main story, and wouldn't have seen the light of day if it weren't for this side project. I'm proud of what that turned into, and I'm glad to see people like it in general.

So, that brings us to the main point, and the next two Spinward Fringe Broadcasts, Revenge and Invasion. The development of these novels has now taken over two years, and over twenty chapters have been written then cut (including content that reappeared in Carnie's Tale and in a short story on the Patreon page), representing some disappointing false starts but good ideas that led in the wrong direction for Broadcast 11. There are great stories waiting to be told in these books and the one that will follow Invasion, but digging down to them has taken longer than anticipated. Now, I believe I've got an outline I'm happy with for Broadcast 11 and Broadcast 12 is in great shape too. It's all I'm working on, and for the tenth anniversary of Spinward Fringe it's all I want to work on. I want to celebrate 2018 by moving the story forward in meaningful, exciting ways, and by wrapping up storylines before moving on to a new era in the Spinward Fringe universe that will see a crossover with Chaos Core and much more.

So, until my holiday and afterwards I'll be working on Broadcasts 11 and 12, and you can get a great big piece already.