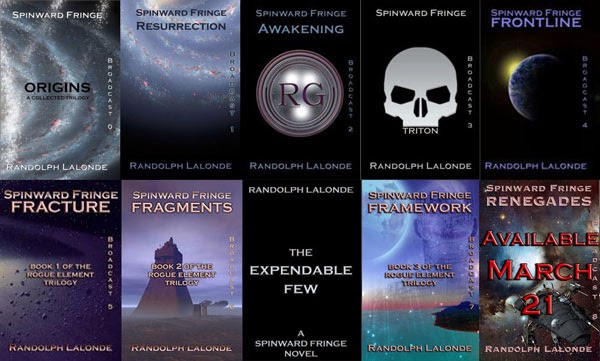 I just finished writing the end of Spinward Fringe Broadcast 8: Renegades. It's not the ending I expected when I started writing the book, but I think it's so much better. No spoilers here except to say that I'm very pleased.

Now that I know I'm happy with the ending and I've spoken to everyone else involved with the production of this book, I can make another announcement.

The book is still in need of another edit, and I'll be working on that with Sylvie as well as another editing partner. Then it will be sent off to one formatter for Ebook distribution, and another for print. The distributors will have to approve it after that. They will point out technical issues (if there are any), and we'll fix 'em then be ready.

Sadly, there will be no freebie codes or preview editions.

There will also be a special release through my own website that will include exclusive digital bonuses and a version of the Ebook for all readers. The Special Release will cost exactly the same as the normal Ebook version of Renegades, but it will only be available through www.spinwardfringe.com.

There will be a signed print edition available in April as well, and that will include the same content as the Special Release on a USB key that will ship with the signed printed book.

So, again, Renegades will be released on Friday, March 21, 2014 in Ebook form and in print sometime in April.

Thank you so much for buying my books and supporting me, I hope this book isn't surpassed by it's hype. It's something I'm proud of and I hope you all enjoy it!