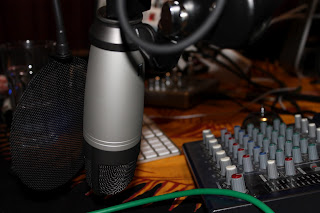 The last time I was in a decent home studio I was laying down drum tracks for a speed metal tune. I won't tell you exactly how long ago that was, but I will say it was more than a decade and less than a half century.

Here's the truth about writers - a lot of us have to find other things to do, otherwise we'll go dry and get all distressed about not having any fresh ideas. That's not a happy place.

Speaking of happy places, I've found one in a new rented home that I'm just finishing moving to. I've been working on writing on most days, and when I'm not writing / editing / scribbling on my white board, I've spent time getting situated.

One project I hoped to get going is the media studio, and I finally have the space for it. With the help of a good friend, I've been able to put some old technology to use and build a studio on the cheap. Some of the equipment was donated from my Father, a highly talented Blues Man (small, but good quality sound board, and one of our Samson C01 Mics), and many of the fixtures were affordable thanks to a huge sale at our local Staples / Business Depot store.

Meanwhile, that good friend I mentioned (he goes by The FirstOne Crewcast on Facebook). has been busy gathering info from the readers and putting together some of the meat of the show. I take care of a lot of the technical aspects while he does some important topic planning. Considering he's read the books at least eight times and is great at putting facts in order, that makes him a pretty good fit for this sort of thing. He's also helping with some research for Broadcast 7.

The above picture shows a small part of the studio, it's about 70% complete. The important parts are done, and it doesn't sound too bad, so we're going ahead with the first podcasts this week when I'm not editing, researching or writing. We've already done a lot of learning on that front, as evidenced by a post I put up on Facebook earlier this evening:


More research went into Broadcast 6 today, got a little more of Broadcast 7 finished today, The FirstOne Crewcast and I got our feet wet, doing a little podcast recording.

We got some important mistakes out of the way:

1) Had a pre-podcast discussion that would have been perfect for the live discussion.

2) Finally figured out how to mount a pop filter on the mics, which are hanging from mounts that are NOT compatible. We cheated without using duct tape. It took a while. We should have just used duct tape.

3) Did a whole 15 minute segment (huge, considering it's a half hour show), before I realized the system was ready to record, but we didn't actually click the big red button to record what we were saying. It's no biggie, I completely screwed up the intro and forgot what I was going to say at one point.

4) Got the first 'deer in headlights' + 'nothing but crickets' response from Ray aka FirstOne after asking him a question. It was actually pretty hilarious.

We'll get it tomorrow, I'm sure. Tons of fun so far.

Now, back to work! 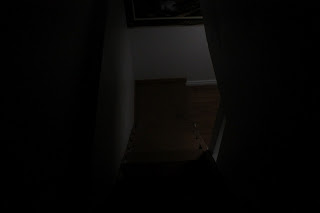 Pictured right: The entrance to the studio, which we're seriously thinking of calling 'The Bunker.' It's a little dark, and that first step is a doozy.

Before I end this post and get back to work, I have to thank a few people who made a real impression on me when they worked on one of the longest running podcasts I've ever seen. Geoff, Jay, Ross and Mickey. I'll never forget Somacow, and you guys need to poke me if you ever start anything new. I'd also like to say hello to the Sound The Alarm Podcast, everyone on the Facebook Page, Twitter, Glenn (my fellow Canadian), Sylvie (who worked on other things in the background), Kevin Smith (who didn't assist directly, but had a lot to do with this anyway), as well as to all the musicians who have given us permission to use your tunes for the end of each episode.

We're taking questions for the Crewcast Internet Radio Show regarding Spinward Fringe and anything else you'd like me to try and answer, so type something in below.

Now, back to work on getting Broadcast 7 out there for August 14!

[You'll be able to find Crewcast Internet Radio episodes on this blog once they start coming out.]
Posted by Randolph Lalonde at 9:49 PM 5 comments: 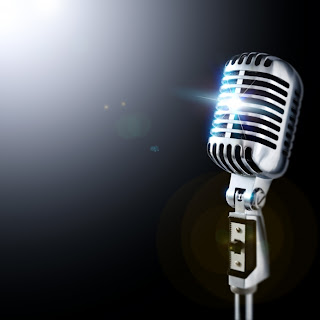 I can't keep this under wraps any longer!

A real test is in order now that some basic audio equipment is in place in our little studio. Since I can't write for 12 hours a day, and I have some spare time, the First Reader and I will be putting together a podcast.

I don't have a radio voice, but we're going to produce the best, most entertaining podcast possible in a limited series. It'll be freely available and highly Spinward Fringe centric.

The idea comes from several conversations the First Reader and I had while we were hanging out and setting up the studio and office space. He's also working on the encyclopedia, and the questions he's coming up with about the universe are not only the kinds of things multiple-time readers have been wondering, but they go well beyond.

As it stands, the podcast will be cut in half hour episodes, it will be free, and the number of episodes will be determined by how much interesting material we have.

Like everything else surrounding the Spinward Fringe series, you have a say in what you want us to include in the podcast.

Over the next two weeks I'm going to be asking for input from you, starting right now.

Posted by Randolph Lalonde at 3:33 PM No comments: