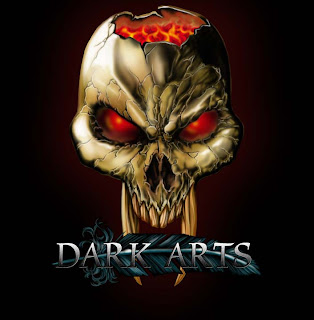 Before I dig in to my Easter blog post, I'll give everyone the update on the Spinward Fringe books. Both of the books I"m working on right now - Spinward Fringe: Expendable Few (the novella), and Spinward Fringe Broadcast 7: Framework - are finally going smashingly well. I wrote a ton of material for Broadcast 7, including two previous drafts. A lot of it was tossed out so I could deliver a denser, tighter book plot wise. I'm near the end.

The novella, Expendable Few, is almost finished. It's really helping me develop the ending of Broadcast 7 while delivering a type of story that is vastly different from the existing Spinward Fringe series. Test readers will see chapters by the end of the month.

Now, on to the topic I planned to bring up here. The Horror Adventure Novel. That's what the Dark Arts novel will be. I've written three and a half Spinward Fringe books in a row, without a break, so Dark Arts will be a very good palette cleanser between Broadcast 7 and Broadcast 8. The reasons why the Dark Arts novel is being written are few:

1) Horror Adventure novels seem sort of rare. I remember the choose your own adventure books from my youth, and there's H.P. Lovecraft. I'm sure there are others, but in a market awash with Young Adult, soft horror, I don't see much. Oh, and before someone asks: no, Dark Arts will not be a 'Choose Your Own Adventure'

2) I love the idea behind Dark Arts, and there are some compelling characters living in my head that don't want to exist in any other world.

3) The Dark Arts experimental short has its own dedicated fans. I have received emails form people who actually accused me of having the finished novelized version, or extra chapters. They made it perfectly clear that I MUST release them, or something might happen to my house pets, I might even get something nasty in the mail. Thankfully, I don't have any house pets at the moment. Sadly, I don't have a completed novel or finished extra chapters to release to the public either.

4) Even though the experiment was completely unedited, the major complaint about the short was that it was.... too short. That tells me that there was some content in there that was worthwhile to someone other than myself.

So, it's time to approach this book seriously, and write a one shot horror adventure novel. By the time I'm done, I'll be able to approach Broadcast 8 with a clear head.

I know I'll enjoy writing the Dark Arts novel. Writing the experimental short was a lot of fun, and I'm looking forward to finishing Broadcast 7, then taking a break in a different world.

[If you want to see the Dark Arts experiment page, click this link.]

The Kindle Version is coming, just waiting for word back from Scrivener support.
Posted by Randolph Lalonde at 1:32 PM

How can I get a copy of your Dark Arts content for an ereader? You have the stories up on your website but I could not find a way to buy a copy. Should I just copy and paste what you have put up into Word? I enjoyed the Spinward Fringe books and would like to your horror.

I managed to create a new ePub version, so I posted it above. I'll be working on the Kindle version.

Thank you for posting the epub file. I threw it into calimbre and will begin reading it after finals.